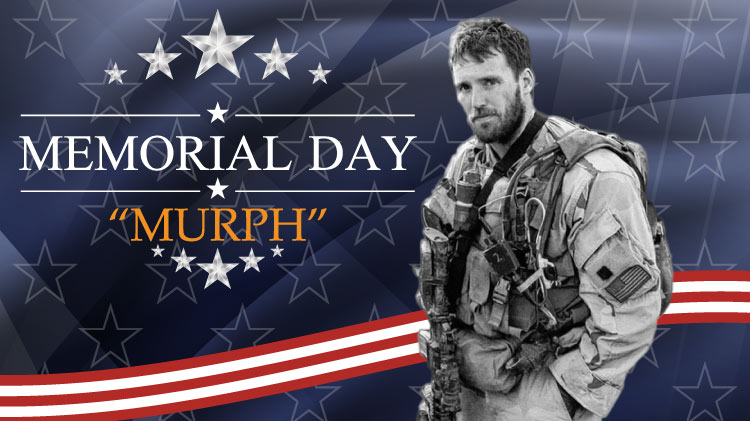 As evidenced by Simone’s daily upload to her Instagram account, Coach Mike is known for programming intense WODs at CrossFit Gotham. There are, however, some workouts that go above and beyond the box’s usual intensity level: “Hero WODs”. A “Hero WOD” is a tribute to a first responder or member of the armed services who died while serving honorably in the line of duty, which makes them somewhat more meaningful than the average daily workout. Among the toughest, meanest, and most notorious of these “Hero WODs” is Murph!

But what exactly is Murph? In a nutshell, Murph is a prolonged challenge that combines an athlete’s endurance, strength, and mobility, with a whole lot of time in their own head – a head that is continually telling you to slow down or tap out. The workout is named after Navy Lieutenant Michael Murphy who was killed during Operation Red Wing that took place in Afghanistan on June 28, 2005.

Lt. Murphy was posthumously awarded the Medal of Honor, the highest military decoration presented by the United States government to a member of its armed force. Since Lt. Murphy’s actions on that fateful day embody the values and spirit of true heroes, and to immortalize his courage, bravery and most of all – self-sacrifice, a “Hero WOD” was named in his honor.

This workout, originally called “Body-Armor”, was created by Lt. Murphy himself and comprises of a one-mile run, 100 pull-ups, 200 push-ups, 300 air-squats, capped off As the story goes, Lt. Michael Murphy was part of a four-man Navy SEAL team entrenched “deep behind enemy lines” in a remote area of Afghanistan, when local farmers observed the team and reported its position to Taliban fighters. Soon, the four were under attack, each of whom was wounded as they made their way down the side of the mountain. With the situation worsening, the communication officer “sought to place a distress call back to base,” but before he could, he was shot in the hand. Lt. Murphy, wounded at the time, “fought his way into open terrain – knowingly exposed himself to increased enemy gunfire”, to aid the communication officer and make the call himself. While attempting to contact base, Lt. Murphy was shot in the back, causing him to drop the transmitter. According to the action summary, however, “Murphy (then), while severely wounded, picked it back up, completed the call, and continued firing at the enemy who was closing in. Severely wounded, Lt. Murphy returned to his cover position with his men and continued the battle.”

Because of his brave and daring actions on the field of battle, by another one-mile run – all while wearing a 20lb vest (Yes Mo, you have to wear a vest). Murph is not easy, it is a high-volume workout and requires the respect it deserves. Because of its intensity, Murph has become a Memorial Day tradition at CrossFit Gotham and many CrossFit boxes around the country as a way to pay tribute to those who put their lives in harm’s way so we don’t have to. Interestingly, COVID-19 has made Murph even more infamous: On Memorial Day 2020, Hunter McIntyre set an unofficial record, allegedly completing Murph in 34 minutes 13 seconds (Jason!!), and Lee Davis of Rhapsody CrossFit in Charleston, South Carolina, did Murph 16 times in under 24 hours. But most astonishingly, Graham Dessert completed Murph every day for 365 days straight, with the last time being on February 20, 2021 (James, this may be a way to lose those twenty pounds – just a thought).

So, this Memorial Day weekend, as a way to pay tribute to our first responders and military personnel, join CrossFit Gotham in its annual Murph challenge. Just remember that even though your palms may be ripped and bloody, your chest feels like it’s about to explode, and your legs can barely take two more steps (And no matter how long it takes, Alley), put it aside, stop listening to that voice in your head and keep pushing forward to honor those who fight/fought for us and, most importantly, for those who gave the ultimate sacrifice. Just remember to bring your 20lb vest.

« 3 Exercises to Fix your Lower Back Pain

What’s Keeping You From Achieving Your Goals? »

We'd love to send you information about our pricing

Enter your details below and we'd be happy to show you our rates and explain them in detail!